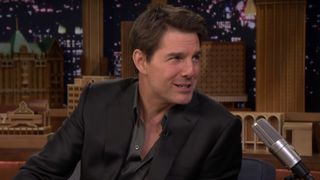 On yesterday’s episode of The Tonight Show Starring Jimmy Fallon, Tom Cruise sat with host Jimmy Fallon to promote his latest Mission: Impossible film, Fallout, and took part in a bizarre and hilarious parody skit of the franchise.

Before acting out the pair’s “Mad Lib Theater” sketch, Cruise gave a series answers to Fallon’s prompts, which included, “What you would shout if a spider crawled up your leg” and “Favorite song lyric.” Cruise’s responses then formed the basis of the dialogue in the skit. Watch above as the two act out their lines surreptitiously from behind newspapers in a train carriage, barely able to keep a straight face at the sheer silliness of the whole affair.

The real Mission: Impossible — Fallout is out in theaters on July 27. You can watch the trailer here.

Elsewhere, previously on The Tonight Show, Fallon and house band The Roots teamed up with the Backstreet Boys for a special, kiddie-instrument rendition of “I Want It That Way.”