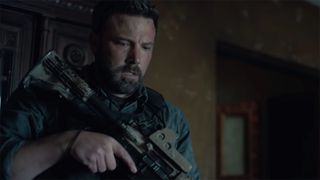 Following the first official trailer, Netflix gives us another look at its new action film, Triple Frontier, starring Ben Affleck and Oscar Isaac. Joined by Charlie Hunnam, Garrett Hedlund and Pedro Pascal, the gang of badasses portray five former United States special operatives who come out of retirement to pull off the heist of a lifetime.

Overly frustrated following a life of service with little to show for it, the guys decide to take down one of the biggest drug cartels in the world, whose leader just so happens to have millions of dollars in cash stashed away. They may have bitten off more than they can chew, however, as the heist goes south, and they are forced to go on the run.

Adria Arjona also features in Triple Frontier, directed by J.C. Chandor of A Most Violent Year, which Oscar Isaac also starred in. You can look forward to the action picture coming to select theaters on March 6 and Netflix on March 13.