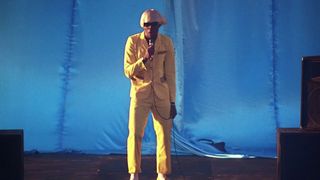 Tyler, the Creator will be releasing his much-anticipated fifth studio album, IGOR, in just a matter of days. Ahead of drop, the 28-year-old musician is teasing even more music, seemingly from the project.

Following a series of teasers, Tyler has shared another new clip titled “New Magic Wand.” In the description he expresses thanks to Santigold who is featured on the track. Similar to the video for “a boy is a gun*,” he’s wearing the signature yellow outfit, flat top, and afro pick. Watch the latest clip above.

IGOR drops on May 17, but that’s not the only project that Tyler, the Creator has out this week. Last week, he shared the trailer for the second season of his Adult Swim show, The Jellies which premieres on May 19.

For more stories related to IGOR, learn about how the artist behind Tyler’s album artwork deals with Tourette’s syndrome.

Tyler, the Creator’s ‘IGOR’ at a “Normal Pitch” Will Get You in Your Feelings
MusicsponsoredAugust 12, 2019
Follow
Highsnobiety Music
What To Read Next
Load More
Search Results
Load More