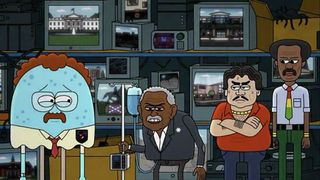 Tyler, the Creator is about the crank out another album, but while he has everyone’s attention he’s gone ahead and dropped a trailer for The Jellies. The second season of the animated series will reportedly follow the members of the Jelly family more closely and examine their respective roles within the Walla Walla community.

An accompanying press release states that “Debbie, Barry, KY, and Cornell each face their own, sometimes very personal, challenges. Depending on each on each other and fellow townspeople for support is not always the best option.” Tyler, the Creator and Lionel Boyce originally created The Jellies back in 2015 on the Golf Media app, but it was acquired by Adult Swim in 2017.

IGOR is slated to drop on on May 17 followed by the second season of The Jellies airing on May 19 via Adult Swim at midnight ET. Watch the full trailer in the video above.

While you’re here, revisit our interview with Lewis Rossignol about creating the alternate IGOR album cover.

15 Drops
The 15 Best Products to Drop This Week & Where to Buy Them
SelectssponsoredJuly 14, 2019
Follow
Highsnobiety Music
What To Read Next
Load More
Search Results
Load More