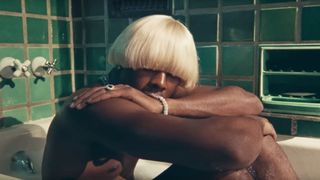 Tyler, the Creator dons the blonde wig once again for his extravagant new video for “a boy is a gun*.” The visuals, directed by Tyler himself, underscore the track’s many allusions to the rapper’s sexuality.

The video, shot in a ’60s film style, sees Tyler, the Creator stumbling across a manicured lawn before we are introduced to his presumed soon-to-be ex-lover. The man is seen washing his hands as Tyler delivers verses from the bathtub. The two then descend into a full-blown breakup. Tyler rages as the man packs his bag and exits the luxurious waterfront mansion.

The video ends as Tyler shoots a gun into the air, perhaps the film’s most obvious visual reference to his homosexuality, as well as a reversal of the feminist idiom, “a girl is a gun.” The phrase originating with the French-made western film, Une aventure de Billy le Kid/A Girl is A Gun. Here however Tyler reworks the phrase to apply to the inherent potential for injury that attends the disintegration of a relationship.

Kacey Musgraves, Gwyneth Paltrow and the Undeniable Appeal of the Celebrity Candle
LifesponsoredFebruary 25, 2020