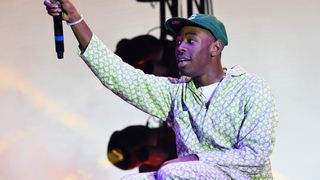 Not long after releasing the single “PUFF,” Tyler, the Creator has blessed listeners once again with another synth-doused track, titled “BUCKET.” The instrumental notably revamps the rapper’s “2SEATER” which appeared on the 2015 album Cherry Bomb.

As per his previous release, Tyler underscores the song’s production and arrangement under the moniker ‘gap toof t.’ Here, synths, strings, and xylophone-sounds merge, for a smooth, easy listening late-night fall drive. Elsewhere, the track is cut with a vocal interlude between Tyler and a passenger asking him to “roll my window up.”

“BUCKET” follows a string of singles released by the entertainer on his YouTube channel, which includes “435,” “GELATO,” “PEACH FUZZ,” and “QUARTZ.”

When you’re done, revisit “PUFF” below.