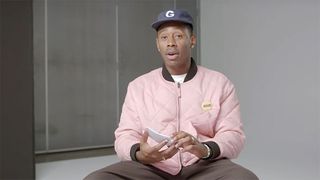 For GQ‘s 24th annual “Men of the Year” issue, Tyler, the Creator is one of four cover stars alongside Jennifer Lopez and Robert De Niro and Al Pacino being celebrated for standing out in 2019.

Alongside his magazine interview, Tyler went in-front of the camera to answer questions sent to him by other celebs, including Kendall Jenner, Seth Rogen,  and Tracee Ellis Ross, who ask him about his favorite movies, why he rates foot massages, and more. As you might expect, the result is hilarious — particularly around the 1:32 mark where he lovingly roasts Kendall Jenner. Watch above.

In the magazine interview, Tyler explains how he hates fashion week parties and labels most partygoers as “goob-goobers”. “If you wear a size 13 and have on Air Force 1s and skinny jeans, I know we’re not here,” he describes a certain type of person he doesn’t want close to him. “It’s a lot,” he continues. “You just gotta be aware of certain shit and just know.”

Tyler loves to keep his friends extremely close. Throughout the interview he opens up about the early days of his career and deciding on working with long-time manager Clancy.  “I was just such an erratic, wild personality. But I had these ideas I was serious on,” Tyler tells me. “When you meet someone who’s like, ‘PEE ON ME!! RAH RAH RAH! I’M CRAZY!’ all the time… But then, I have this actual, serious idea. Some people would write you off, but they didn’t. When you finally find someone to listen to you after years of not being taken seriously, you hold that shit to your heart.”

He also dives into the perception of his IGOR character stating, “the IGOR shit plays a thin line between goofy and funny and art,” he explains. “I always have to be careful so it doesn’t fuck everyone’s perception up. It’s art, and an idea.” He goes on to describe the persona as a “Chihuahua.” Tyler says, IGOR is “a lot of barking, but not a lot of bite.”

Throughout the article, Tyler also opens up about performing at Madison Square Garden, gaining weight, and being drawn to women fashion. “With the scarf and the cool blazer. It’s like, I don’t have the hair to pull that silhouette off,” he says. “So it’s like, man, if I was a fucking white lady in Denmark…”

Read the full “Men of the Year” cover story on Tyler, the Creator on GQ here.

You Can Now Watch Tyler, the Creator Perform ‘IGOR’ in Full
MusicsponsoredAugust 17, 2019

How the Artist Behind Tyler, the Creator’s Alternate ‘IGOR’ Cover Deals With Tourette’s Syndrome
DesignsponsoredMay 8, 2019

Tyler, the Creator Opens Up About His UK Ban; “Theresa May’s gone, so I’m back.”
MusicsponsoredOctober 5, 2019
Follow
Highsnobiety Style
What To Read Next
Load More
Search Results
Load More