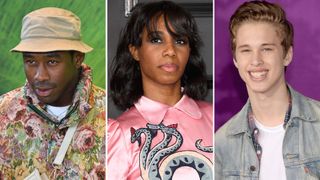 Tyler, The Creator is having a major moment right now following the success of his annual Camp Flog Gnaw festival and involvement with the motion pitcture soundtrack for The Grinch. Even though the film is about to be out in theaters, that hasn’t shaken the rapper out of the holiday spirit.

Following the unveiling of a Grinch-inspired pair of GOLF le FLEUR* x Converse One Star sneakers, he has casually dropped another modern Christmas banger called “Lights On” featuring Santigold and Ryan Beatty. On top of that, the single is fresh off Tyler, the Creator’s brand-new EP titled Music Inspired by Illumination & Dr. Seuss’ The Grinch. The project is slated for release on November 16, the same date that the movie premieres.

Revisit our op-edon why Tyler, the Creator curating The Grinch soundtrack is a radical move and scroll down to peep the official tracklist for the EP.

Up next, check out Tierra Whack’s photo diary of her experience at Camp Flog Gnaw right here.

New Zealand Has Lifted Its Ban on Tyler, the Creator
MusicsponsoredAugust 7, 2019

GoldLink Rolls With Tyler, the Creator & Jay Prince on “U Say”
MusicsponsoredJune 6, 2019