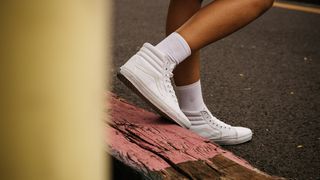 The greatest wish of any footwear designer is to create something that’s instantly recognizable. And so going by that rule, the inventor of the Sk8-Hi must be pretty pleased with themselves. Vans’ iconic hi-top is just that: iconic. The distinctive sneaker was born out of the need to support, literally, the skaters and their ankles. However, its influence extends beyond the skater community and into the lives of almost everyone, from producers and artists to creative entrepreneurs.

We asked DJ, Radar Radio presenter and model Snoochie Shy, entrepreneur and Sukeban Magazine publisher and co-founder Yuki Haze, as well as the help of genuine skater (and model) Elliott Jay Brown to wear the Sk8-Hi how they want. Shot on location across London, from the streets and busses of the UK capital, to Snoochie Shy’s decks at Radar Radio’s studios, to the markets and local neighborhood of Yuki Haze, the Sk8-Hi is as multifacetated as the streets of London and the people who walk it.

This is how you can wear the Sk8-Hi, as well as the story of how it became the versatile, legendary piece of footwear we know today. If it’s not part of your rotation, then it should be. Get it at Vans.eu.

Originally known as ‘Style 38’, the Sk8-Hi debuted in 1978 and was only the second sneaker from the Van Doren Rubber Company to wear the distinctive side stripe. Fun fact: at that point, the distinctive stripe was known as the ‘jazz stripe’, with the name given by Vans founder, Paul Van Doren, after he doodled casually one day across the side of a sneaker.

Anyway, ever the company to respond to what its young skating Cali customers were asking for, Vans created the extended Sk8-Hi with vert skaters in mind. At this point, vert style was still in its infancy, mostly practiced in empty backyard pools across the US and the Golden State. The quilted padding up the ankle offered much-needed support as skaters transitioned from horizontal to vertical planes and diced with smashing their legs against either the board, pool edges or just the ground. And Vans’ ultra-grippy trademark waffle sole also helped as well.

Vans were already being worn by others outside the early skating community of the 1970s. This was a west coast label that started making board shoes for surfers at the end of the day. While the Sk8-Hi quickly transferred into other burgeoning ‘action sports’ like BMX, Vans were already and understated but key ‘look’ in countercultural circles. Pretty soon after it came out, it was appearing on the feet of punk, rock and metal legends—think Black Flag, Bad Brains, Social Distortion, Slayer and Iron Maid, while the wider side stripe family made its way famously onto album covers of Minor Threat and, of course, the Ramones.

Fake sneaker doodles, distressed looks and ‘customizations’ may be in vogue now with larger fashion labels, but a sneaker like the Sk8-Hi was one of the original canvases for this. In fact, Vans’ iconic checkerboard motif actually started off as a sketch etched on by the people who bought the shoes, and not from Vans themselves. The increased canvas space the Sk8-Hi gave presented even more potential for people to make the sneaker their own and transform it into something else entirely.

This mix of countercultural icon crossed with a genuinely supportive and functional sport shoe means the Sk8-Hi has continued to be relevant almost 40 years on, both within and beyond the skater community. It is not just one thing, but a blank artistic canvas for people to style and work their own way. Whether it’s skaters, artists or just the everyday entrepreneur, the Sk8-Hi is as versatile and multifaceted as the people who wear it.

Peep our exclusive shoot with Brown, Shy and Haze, above, or get your own version of the classic to make your own at Vans.eu.

Next, need more style inspo? Peep how some modern style icons are working the Sk8-Hi on Instagram here.

Stadium Goods Just Kicked Off Its 15% Off Everything Flash Sale
SelectssponsoredDecember 13, 2019