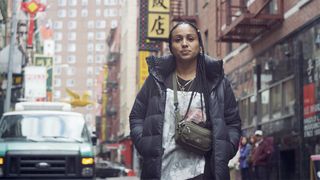 Venus X is the fearless founder of GHE20G0TH1K, the beloved New York underground party that’s been celebrated for its counterculture attitude and unflinching dedication to creating an inclusive space on the dance floor. Founded in 2010, the party has since grown to include a record label, a concept store and a self-styled brand voice that is singularly New York.

We linked up with Venus, whose demanding DJ schedule sees her spinning records across the East and West Coast, and the world. Last year she and DJ Asmara even spent a month in Brazil creating their dance-inducing Putaria Maxima Volume 1 mixtape, which celebrates the sounds of the Latinx diaspora.

Venus’s wanderlust isn’t limited to cross-country journeys, either. She donned her Cryos jacket from The North Face to take us from Chinatown to the deep Bronx where she spent much of her childhood. Here is her story.

The Magic of Santos

“I did many bad things in that building,” said Venus of the sprawling compound formerly known as Santos Party House. Her memories of the club turned retail space, which, like many of New York’s most treasured nightlife gems, eventually succumbed to the lure of property developers, are especially fond because they are tied to the genesis of GHE20G0TH1K.

“The owner let us use their club on a regular basis. On the best nights, Friday nights, we took it over top to bottom. There would be lines down the block – 700 people would show up. We’d only promote for two days so it was legitimately ridiculous. I think it was all meant to be because the timing was so right. Back then everyone was rolling through – the rappers, the celebrities, even still, we were able to DJ exactly how we wanted. It wasn’t a hip-hop night, it wasn’t a gay night; it was a wild mix of everything, literally. If you’re in your 20s or 30s you probably went to a GHE20G0TH1K party. I know they’re not the same anymore. They’re still fun but this was like real New York shit.”

“New Yorkers take Chinatown for granted. I think it’s one of the coolest places in the city. I go to Asia a lot to DJ and I wish I could stay there sometimes. Still, it’s kind of nice to have our own version,” said Venus who was fresh off of a hard-earned vacation in China, Thailand and Japan. “I just love it here, it feels kind of like being in a VR movie in a way,” she continued. For Venus, whose sets often feature combatively rhythmic beats underpinned by an urgent, frenetic energy, parties are more than a place to dance. Like Chinatown, the gatherings she presides over are a place for self-expression.

From costume-esque attire to impromptu dance battles, GHE20G0TH1K has the same compelling sense of life the restaurant-choked pockets of Mulberry, Canal, Elizabeth and Orchard, (where Venus and her crew roam), also have. “I don’t know what people do but they should just come to Chinatown to get inspired. You can get a cute phone case and a foot massage,” the DJ explained as she and her friends passed one of the many stalls hawking trinkets and phone accessories.

Opened in May 2017, Planet X, Venus’s flagship concept store is as much a physical manifestation of resistance as it is the DJ’s effort to hold onto the pieces of New York that shaped her adolescence and early adulthood. In Venus’s own words, there could be no better place to have the store than in Chinatown, one of the greatest sources of inspiration for her music.

The space is an update from her Brooklyn store, which featured Pollock-style paint splashed walls and a markedly club kid aesthetic. Yet even with its much more minimalist bent, Planet X converys the spirit of GHE20G0TH1K and all that it stands for. If merchandise like the popular “play with my pussy” t-shirt is anything to go by, the party series turned lifestyle brand hasn’t lost any of its wit or bite.

Warehouse parties are nothing new to Venus, who came of age in the club scene. Since then, she’s seen the metamorphosis of landmarks like 975 Grand Street, which transformed from rave scene to business. And while the loss marks the end of an era, Venus also sees the shapeshifting nature of New York with uncommon clarity. “The city is changing, and capitalism is taking over. I think that capitalism and culture are at war. Anyway, this is the perfect example of why we have to tell these stories,” Venus shared.

“You wouldn’t know that so many things had happened in there if we didn’t talk about it. We are part of a culture that’s been happening for a long time, like New York culture, you know, we started these raves because we were inspired by what we heard about in the ‘90s. We wanted to grow up and go to those places and they didn’t exist, so we started to create them. Bringing everybody together, DJing, it happened naturally. It was very easy. This is what we do. When we’re from here, we create music, we create fashion, we create art, we create this space, and we don’t really wait until we find the investor to do it for us.”

The Studio Museum in Harlem

A journey uptown is far removed from the gentrified former haunts of Venus and her crew. That’s precisely why the DJ turned culture curator likes to spend her time there. “Gentrification is a new monster,” she said. “The ‘80s, ‘90s, and even the 2000s were very chill. Now the city belongs to somebody else, and we’re just trying to find little pockets we can make ours for the moment.” Perhaps no place allows for the reclaiming of history better than the Studio Museum in Harlem. Located on historic 125 Street just a stone’s throw from the famous Apollo Theatre, the small museum dedicates its walls to the works of African-American contemporary artists as well as artists from the African and Latinx diaspora.

For Venus, whose party celebrates the many permutations of this diaspora, it’s a place to glean creative insights and to engage with spaces that still feel whole and unsullied by capitalism, politics and the ever-changing nature of New York. A tireless activist for community and culture, at the Studio museum she is entrenched in it. “I try to go to the communities that are the most New York, in my opinion. So, like all the immigrant communities: the Indians in Jackson Heights and in Queens – those neighborhoods are some of my favorite places to go. Still, I’ll always love uptown Harlem.”

“I get a lot of inspiration from the neighborhood where I grew up and my culture. That’s one thing I love about New York – people preserve their culture. It’s definitely something that should be reinforced because our culture helps to make us who we are…You know what I mean? If we’re all in the pursuit of something that’s not where we come from, then we’ll always be trying to change ourselves.”

The Eastern stretch of Dyckman, which is a heavily Dominican area, represents a proud heritage and a singular piece of the city that gentrification has not yet managed to dilute. Dyckman Express, a neighborhood mainstay serving home cooked Dominican fare, is especially reminiscent of the area’s denizens, who flock there for both a meal and a chance to socialize. Venus is one of the restaurant’s most dedicated regulars, often stopping by to consume a plate after a long DJ set. And even when she’s traveling the world, the memory of comfort food always brings her back.

For more on New York City’s influential locals and their journey to success, check out restaurateur John Seymour and his rise to culinary fame.

There’s Now a Lottery for This North Face x Spiber Parka Made of Fermented Proteins
StylesponsoredAugust 29, 2019