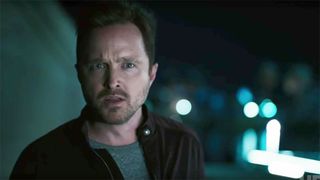 HBO is already working on filling that Game of Thrones-shaped hole in your life. Just as the Thrones finale aired, the network dropped the first trailer for the third season of its other big-budget hit TV show, Westworld — and it introduces a new but familiar face: Aaron Paul (Breaking Bad).

“Sometimes it seems like the world looks alright. Like they put a coat of paint on it. But inside it’s rotting to pieces,” is how Paul’s as-yet-unnamed character describes the futuristic city where the trailer takes place — a setting that couldn’t look more different to the Old West seen in previous seasons. Check it out in the trailer above.

Most of the show’s characters are missing from the trailer, apart from Evan Rachel Wood’s Dolores, who emerges from darkness toward the end of the one-minute 40-second clip.

Westworld season three is set to hit HBO in 2020.