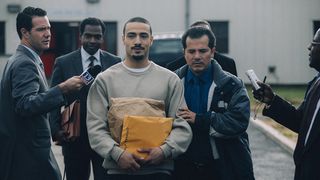 Back in March Netflix provided us with our first look at Oscar-nominated director Ava DuVernay‘s four-part limited series, When They See Us, which delves into the story of the Central Park Five, the infamous case of five teenagers of color who were wrongfully convicted of rape and sentenced to prison in 1989. As the program is due to premiere this week, today the streaming service shares a new full-length trailer, which you can view above.

The story didn’t end when they put them behind bars. It was only beginning. #WhenTheySeeUs. This Friday. May 31. On @Netflix. pic.twitter.com/fW9coW88uo

When They See Us centers around these five kids from Harlem — Antron McCray, Kevin Richardson, Yusef Salaam, Raymond Santana, and Korey Wise — beginning in 1989 when they were fist questioned about the incident, on into 2002 surrounding their exoneration, to 2014 when they reached a settlement with the city of New York. The new trailer previews how the five men readjusted to society following their release from prison.

Michael K. Williams, Vera Farmiga, John Leguizamo, Felicity Huffman, Niecy Nash, Blair Underwood, Christopher Jackson, and Joshua Jackson, among others, star in When They See Us, which comes to Netflix May 31.