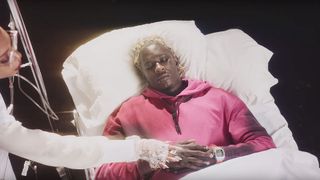 Young Thug has just dropped an official video for his track “Just How It Is.” The song, which serves as the intro to his latest album So Much Fun, is paired with a bunch of anesthetic-induced visuals that may or may not have drawn inspiration from the artist’s recent spell in hospital. Watch above.

The self-directed video sees Thugger entering an alternate reality after being anesthetized. The rapper’s subconscious realm is rendered in black and white and features snakes, goats, and some characteristically bold fits. Browse through the behind-the-scenes shots below.

BTS OF “just how it is”” Thanks to @certified_solid & @deecosey

“Just How It Is” was produced by Wheezy and Nick Mira and is the latest video from So Much Fun, his first Billboard number one album.