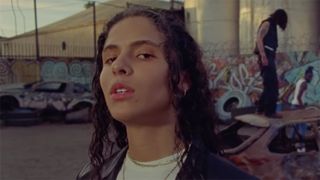 G.O.O.D. Music artist 070 Shake is currently prepping the release of her debut album, MODUS VIVENDI, which is due out in one week’s time. Today the 22-year-old musician shares yet another track from the LP, “Guilty Conscience,” a followup to last month’s “Under the Moon.”

070 Shake introduces the song to the world via an official music video directed by Lauren Dunn. In the clip we see two rival gangs lining up for an all-out brawl. Press play above to check it out.

“Guilty Conscience” is the latest single release from Shake’s anticipated debut album, following the aforementioned “Under the Moon,” as well as “Nice to Have” and “Morrow,” which arrived simultaneously this past spring. In speaking on the project and her process of recording, 070 Shake said, “I just really go with how I feel in the moment, and then that’s where the writing comes from. It’s like an ongoing disperse of words when I feel something.”

MODUS VIVENDI releases via G.O.O.D. Music and Def Jam next Friday, January 17. Just two days later, Shake will be embarking on a seven-week headlining world tour. Head here for dates and locations, as well as to pre-save the album.