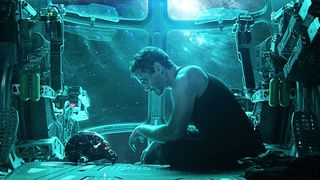 Marvel has followed up its 30-second TV teaser for Avengers: Endgame with a featurette guaranteed to get you hyped for the final chapter of the “Infinity Saga.”

The minute-long “Stakes” clip opens with Robert Downey Jr. divulging, “Infinity War was nuts… but this one is going to be our finest hour.”

Scarlett Johansson recounts “Thanos wiped out 50% of all living creatures” and according to Johansson herself, “these are the highest stakes that the Avengers have ever faced.” The remaining Avengers are now compelled to take one final stand in Marvel Studios’ grand conclusion to 22 films.

Chris Evans further fuels fan excitement by hinting “even when you think Marvel’s pulled every trick in the bag, they’ve actually saved the best stuff for this one.”

Downey Jr. is sure that there’s no way anyone could guess what will happen in Avengers: Endgame.

The final chapter of the MCU’s “Infinity Saga” is out on April 26.

‘Avengers: Endgame’ Tickets Are Being Listed on eBay for Insane Amounts
MoviessponsoredApril 3, 2019