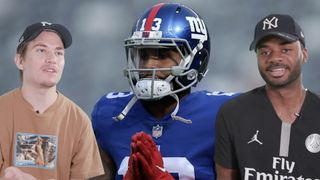 The Supreme sleeve has finally made it’s way into the NFL, and you can probably guess who freaked it during their teams pre-game. On this episode of Ball Boyz, co-hosts Kyle Hodge and Ian Servantes react to Odell Beckham Jr. sporting the red Supreme sleeve while warming up against the New Orleans Saints. Sadly, he wasn’t able to rock it during the game.

Supreme sleeves may be new to the NFL, but the NBA has gotten plenty of on-court appearances, heavily thanks to J.R. Smith. The Cleveland Cavaliers guard is actually in a bit of a rough spot with the league over a Supreme tattoo he got inked on his right calf muscle. Smith took to Instagram to reveal that the NBA will fine him every game this upcoming season if he doesn’t have it covered during game time. The Ball Boyz weigh in on the issue, diving into the many times the NBA has cracked down on players sporting brand logos on their bodies.

For our New Era Recap Moment of the Week, Lance Stephenson busts out a multicolored Lakers-themed durag while on his way to a team practice. Check it out for yourself in the video above, and give us your thoughts on the purple and yellow durag. Would you cop?

For more ‘Ball Boyz’, watch our previous episode as we react to the YEEZY basketball sneaker and more.

15 Drops
The 15 Best Products to Drop This Week & Where to Buy Them
SelectssponsoredSeptember 22, 2019

OBJ’s $2.2 Million Watch May Have Distracted You From His Shattered Backboard-Inspired Cleats
SneakerssponsoredSeptember 17, 2019