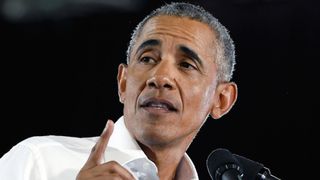 Just days after sharing his favorite songs, movies and books from 2018, Barack Obama can also add charting on Billboard on his esteemed résumé. The former POTUS is slotted at the number 22 spot on this week’s Billboard Hot R&B Songs chart with the single, “One Last Time (44 Remix),” reports Billboard.

The track debuted in December and released by Broadway hit musical Hamilton creator, Lin-Manuel Miranda, as part of his “Hamildrop” series, in which he has featured other stars to remix songs from his Broadway musical to raise money for charity.

Have a listen to the single above, and in other new music, 2 Chainz wields a flamethrower in his “Hot Wings” video.