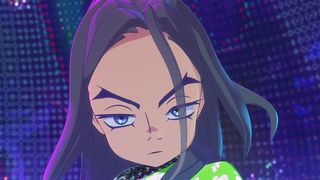 Following a previous collaboration for GARAGE magazine in 2018, Billie Eilish and Takashi Murakami have reconnected on the music video for the pop star’s latest single “you should see me in a crown.” The track came out back in July and is featured on her debut album, WHEN WE ALL FALL ASLEEP, WHERE DO WE GO?. The anime visual features Eilish’s popular BLOHSH character and apparel in addition to Murakami’s signature Flowers.

“Eight months from start to finish, I sprinted throughout the production process with my animation team striving to realize Billie’s vision in an unprecedented way,” Takashi said in a press release.

Billie went on to describe Murakami as an “incredible visionary.” She adds, “It was such an honor to collaborate with him and have our brains and our worlds collide for this video.”

“you should see me in a crown” is available to stream now on Apple Music. Peep the preview above.

For more about Takashi Murakami, peep the video below.

Billie Eilish Directs Herself in the Music Video for “xanny”
MusicsponsoredDecember 6, 2019