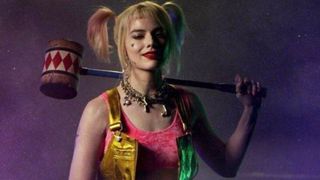 DC Comics is reportedly only showing the teaser for its new Harley Quinn movie, Birds of Prey, in theaters, but as with most things these days, the clip has made its way online. According to Variety, the Birds of Prey footage is being shown in cinemas before It Chapter Two, which releases tonight.

We see Margot Robbie reprising her role as Harley Quinn in the Birds of Prey teaser, as she is joined by superheroes Black Canary (Jurnee Smollett-Bell), Huntress (Mary Elizabeth Winstead), and Renee Montoya (Rosie Perez). The movie follows the quartet as they come together to save a young girl from an evil crime lord in Gotham City, named Black Mask.

Ewan McGregor, Ella Jay Basco, and Chris Messina also star in Birds of Prey, which is due in theaters February 7, 2020.