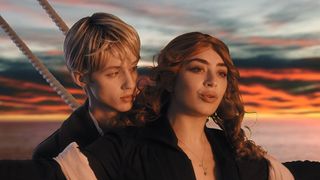 Following last week’s release, Charli XCX and Troye Sivan share the official music video for their collaborative single, “1999.” Appropriately, the aesthetic is a celebration of the ’90s, filled with a slew of pop culture references from that decade.

THE 1999 VIDEO FEATURING POP LEGEND @TROYESIVAN HAS ARRIVED!!!! I LOVE THIS VIDEO SO MUCH!!!! CAN U NAME EVERYONE IN THE VIDEO????? SPAM ME WITH THEM GREEN HEARTS IF U FUCK WITH THE VIDEO ANGELS!!! DIRECTED BY @RYANSTAAKE ???? LINK IN BIO

Throughout the nostalgic piece you’ll see nods to Britney Spears, the Backstreet Boys, Justin Timberlake, Eminem, Titanic, The Matrix, Skechers, and much more. Directed by Ryan Staake and Charli XCX, press play above to watch the entertaining visual.