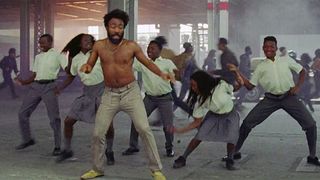 Childish Gambino‘s “This Is America” video still has the internet and the music industry in a stir. At the heart of the Hiro Murai-directed aesthetic are Gambino’s dance moves, which are rich with symbolism, just like various other aspects of the politically-charged piece.

Courtesy of Pigeons and Planes, we in turn get to know the brains behind the dance choreography, Sherrie Silver, a Rwandan-born dancer, creative director, actress, and philanthropist. During their interview, Silver discusses the themes behind the moves, as well as the additional layers within the video. Following a look at the standout excerpts (below), be sure to follow on over to P&P for the entire conversation.

On adding a lighter aspect to a more political visual:

“There are a lot of dark themes in it, so they wanted us to be the light of the video. You know how kids are innocent and kind of unaware of what’s going on? We were there to smile and bring joy to everyone watching it, because the background is bringing so much darkness and reality.”

On the importance of dance:

“No matter how much is going on—even if it’s the middle of a war or poverty or hunger—one thing Africans share is we dance our sorrows away. Not even professionally, it’s just a part of our culture.”

On starting a conversation:

“The whole point is to get a discussion going and to get people coming up with their own opinions. We tried to show what’s actually happening in the world. Not just in America, but in the world. We also wanted to bring joy to it, in the middle of madness. That’s what kids do and that’s what dance does—especially African dance.”

On linking with Childish Gambino:

“I believe it was because of one of the little nieces or cousins of someone on his management team. Apparently she was, like, obsessed with me and she used to watch my videos. She showed the videos to one of them, and when the project came up, they thought I would be perfect to choreograph and portray the happiness that they needed with the happy African school children. Me, working with kids, it was just perfect. I knew exactly how to go about it, because I grew up out in Rwanda. Then I moved to England, but I went back again. So I know how we are in school. I know that dance is everything to us. No matter how much is going on—even if it’s the middle of a war or poverty or hunger—one thing Africans share is we dance our sorrows away. Not even professionally, it’s just a part of our culture.”

On the initial direction from Gambino’s team:

“There are a lot of dark themes in it, so they wanted us to be the light of the video. You know how kids are innocent and kind of unaware of what’s going on? We were there to smile and bring joy to everyone watching it, because the background is bringing so much darkness and reality. I’ve seen a lot of people online referring to us as ‘the distraction,’ which I find quite interesting. That’s why I loved being a part of this particular project, because a lot of people comment, ‘Completely ignore the dancers and Donald and watch what’s in the background.’ You know, there are two completely different worlds in one scene. Or, three different worlds actually. It’s amazing.”

On working with Childish Gambino as a choreographer:

“It was actually great. They’re not easy moves. They might look simple in the video, but there’s a lot of technicality to them. A lot of these moves come from the heart. One thing I noticed was he was so dedicated to making sure he got it right. He got videos of the dances, went home and watched them, then literally came back the next day with the dances down. I remember seeing him rehearsing the hardest move. It was amazing. He was very, very dedicated. I’m just so happy with the final product and his style of movement, because I know that no one has seen him dance in that particular way before. He has his own twist.”

On challenges while shooting:

“I think they brought together the best for this video. The director Hiro Murai is one of the best. The whole team was great. Having a great team of people who know exactly what they’re doing just makes life easier. The extras were doing their job very well, the horse was being obedient… [Laughs]. It was actually a very smooth shoot. You would think it would be very chaotic. But you know, there’s a scene where everything stops and Donald starts smoking. Even with that, that was literally how quiet it was. There were over 100 people on set, but everyone just worked together to make sure the project came together beautifully. We only shot it over two days.”

On putting symbolism in her choreography:

“Sometimes I definitely do. I think it’s important to add elements that the audience can relate to, especially with history. I think it just makes you a better choreographer if you can reference or pay homage to historical figures.”

On the video’s political themes being carried out through dance:

“I think the dance part of it really took the video to a different level. We’re so used to seeing someone getting shot, someone making money, someone smoking—we’re used to seeing all of that. But we wanted to show a light within all the political issues that are going on. And also the contrast of it being African kids in America at a time like this. We were almost misplaced and we were happy in the video. I think it’s just beautiful. It’s an amazing concept. I love it.”

On her favorite part of the choreography:

“I really loved the bit where it says ‘Hunnid bands, hunnid bands, hunnid bands,’ and we were all going around him. It’s a move from the Ivory Coast. It’s a particular way of walking. How we deserted him, that was something I really wanted, just to add to the drama. When does your shadow ever desert you? It’s almost like he noticed everyone was gone, then he goes back into his own world.”

Now, here are eight things you may have missed in Childish Gambino’s “This Is America” visual.