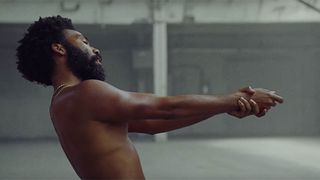 Childish Gambino just released a brand new song called “This is America”. Watch the accompanying music video above. Directed by Hiro Murai, the political visuals find the rapper amidst and causing chaos in an abandoned warehouse. There’s even a cameo by none other than SZA. The song was produced by Gambino himself along with Ludwig Göransson

“This is America” is Childish Gambino’s first new music since his 2016 Grammy-nominated full-length “Awaken, My Love!”. Earlier this week, the musician announced new tour dates with Vince Staples, which will follow the first leg of his previously announced tour with Rae Sremmurd. Peep the tour dates below.

$ with Rae Sremmurd ^ with Vince Staples

What do you think of Childish Gambino’s new song and video? Let us know in the comments below.

In other music news, after Kanye West’s controversial comments about slavery, a Nigerian lawmaker has invited him to visit Africa’s slave ports. Get the full scoop right here.

Childish Gambino Reimagines “This Is America” to Dizzying Effect in ‘Guava Island’
MusicsponsoredApril 18, 2019

Everything We Know So Far About Chance the Rapper’s Upcoming Album
MusicsponsoredSeptember 10, 2018