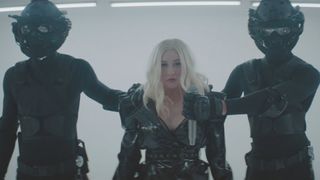 Christina Aguilera has unleashed the official music video for her Demi Lovato-assisted ballad “Fall in Line.” The feminist anthem is a powerful call-to-action for women’s rights, so naturally the accompanying visual is an extension of that message. The action-packed video begins with the abduction of a pair of innocent young girls who are taken to some sort of experimental prison complex that is run by an army of men. As time goes on, Christina and Demi build their strength in solitude and eventually find their way back together. In the end, they manage to overthrow their captors and return to civilization. (It’s really hard to miss that glaring metaphor for female empowerment.)

The pop icon recently provided verified commentary on Genius to explain the inspiration behind the song, which she revealed was written before the #MeToo movement against sexual assault and harassment took off.

“I always felt really driven to have a voice that my mom kind of never had in my childhood and growing up,” she stated. “So I have always wanted to be that advocate for women and anybody that was kind of struggling to have their own voice. And ‘Fall In line’ directly references to believing in yourself and believing to have a voice in its opening lines.”

“Fall in Line” is the third track off Aguilera’s comeback album Liberation which is slated to drop on June 15 via RCA Records. She previously released a Kanye West-produced banger titled “Accelerate” that features Ty Dolla $ign and 2 Chainz.

In other music news, NIKI just dropped her debut EP.