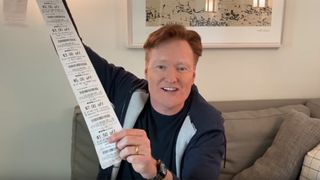 Late night comedian Conan O’Brien is sequestered at home like the rest of us but that’s not stopping him from delivering his off-beat sense of humor. Reacting to the surge in toilet paper demand across the country, O’Brien uploaded a video to his Team Coco YouTube page highlighting the number of ways one can get creative at home with substitutes for toilet paper.

Beginning with a never-ending CVS receipt that the comedian says he received when buying six Tic Tacs, O’Brien makes his way through Valpak coupons, souvenir T-shirts and most impressively, baseball caps. O’Brien also takes the opportunity to warn viewers against what not to use, calling out marshmallow Peeps for reasons you’ll have to just trust him on.

Watch the video above and find all of Highsnobiety’s content dedicated to getting you through this period of isolation at our Work From Home hub.