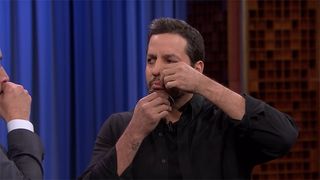 Call David Blaine what you want: a trickster, a magician, or a fraud. But the fact is that he continues to shock, impress, and confuse the hell out of any crowd he performs in front of.

That’s exactly what happened on The Tonight Show, as the magician sewed his mouth shut on stage alongside Jimmy Fallon, The Roots, and Priyanka Chopra.

Never content with anything but the most shocking, Blaine took it one step further and performed a card trick while unable to open his mouth. Priyanka Chopra picked a card out of the deck, Blaine ripped it with help of the Jimmy Fallon, put it back in the deck, and threw all 52 cards into the air.

Without giving too much away, the card ended up somewhere very unexpected. This freaked out Chopra, who dropped the phone she was using to give us a POV of the trick when Blaine revealed where the card was.

Watch Chopra’s POV above and then watch what the television audience saw below ( as parts of Chopra’s footage are too shaky to follow).

What do you think of magic? Is it real? Does Hogwarts exist? Or are you a non-believer? Let us know in the comments.

In other news, G-Star RAW and Pharrell Williams just rethought suits and how to wear them. Find out more here.