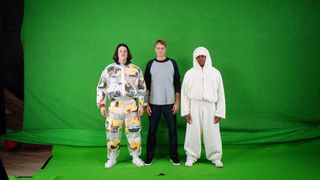 Deaton Chris Anthony sat on his song “Tony Hawk” until he could get the legend himself in the video. The young Los Angeles singer and designer first made the song in 2016 but never officially released it. Then, a year and a half ago, a friend who knows the skater’s son was able to put the two in touch. After 18 months of back and forth, the video was finally made and is now out for the world to enjoy.

In it, Hawk teaches Anthony and LA, who features on the song, how to balance perfectly on each other in a very awkward position. According to the YouTube description, it was the hardest thing Anthony has ever done in his life.

Watch the video above to remind yourself that dreams can come true — whether that’s meeting your idol or simply achieving balance.