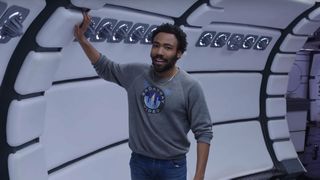 Earlier in April, the Star Wars franchise treated fans to a second trailer for the upcoming Solo: A Star Wars Story. The film follows a young Han Solo and his early encounters with co-pilot Chewbacca and the original owner of the Millennium Falcon, Lando Calrissian.

In this new spot, Donald Glover, who plays Calrissian, whets our appetites by providing an exclusive Cribs-style tour of the fictional star ship. He guides viewers around the spacecraft’s living quarters, jokingly showing off the bar area and bedroom (“where the magic happens”), before getting up close and personal with the well-stocked cape room.

For all this and more, press the play button above. Make sure to catch Solo: A Star Wars Story when it hits theaters May 25.

Donald Glover is also set to appear in this week’s Saturday Night Live episode. As seen in the promo below, the actor/musician will take on hosting duties as well performing under his moniker Childish Gambino.

11 Items That Will Keep You Balanced During Libra Season
LifesponsoredOctober 10, 2019