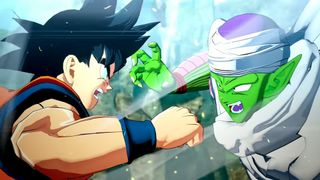 A new Dragon Ball Z RPG game is coming later this year. Titled Project Z, the new role-playing game developed by Bandai Namco and CyberConnect2 will feature “the most dramatic and epic telling of the Dragon Ball Z story,” Bandai Namco said in an official announcement.

Project Z will have players “discover the story of the mysterious Dragon Balls,” and “join Goku and fellow warriors in the never-ending search for the ultimate fight.” The publisher promises an “unforgettable adventure” with “over-the-top battles and challenging quests, create life-long friendships, and crusade to protect Earth from fearsome villains.” No word if the game will include Dragon Ball Super story.

In the reveal trailer, popular DBZ characters including Goku, Gohan, Piccolo, Vegeta, Frieza, and many more are featured as well as iconic scenes and locations throughout the animated series.

With a 2019 release date, hopefully we can expect more character reveals and in-depth looks at the RPG mechanics sooner than later. Project Z is coming to PlayStation 4, Windows PC, and Xbox One. Are you excited for Dragon Ball Z – Project Z

New ‘Dragon Ball’ x adidas Sneakers Could Be on the Way
SneakerssponsoredAugust 14, 2019

How Dragon Ball Rose From Niche to the Mainstream
LifesponsoredJanuary 15, 2020
What To Read Next
Load More
Search Results
Load More