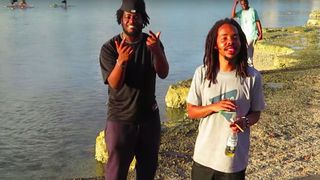 Earl Sweatshirt‘s new album Feet of Clay is out now, packing 15 minutes full of dense bars to digest. The rapper has wasted no time and dropped a video for “East,” which features him rapping over a bizarre accordion loop seemingly out of place as he raps about losing his girlfriend, grandmother, and father.

The lackadaisical video sees Earl on a beach with a Corona, cigarette and friends MIKE and Maxo, interspersed with clips of him and the crew goofing off in a parking garage and what looks like a mall or airport. It arrives just as casually as the album, which was announced just 12 hours prior to release.

Watch the clip above and stream Feet of Clay below.

Here’s How You Could Earn $50K+ Playing PlayStation
LifestylesponsoredJune 25, 2020