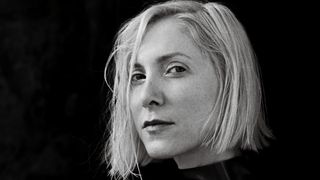 It’s been just over a year since we premiered iconic Berlin DJ Ellen Allien‘s “Mind Journey,” the visual accompaniment to one of her many hypnotic productions. Directed by Kieran Behan of Crystal Mafia, its kaleidoscopic, analog video has haunted us ever since (in a good way). Now, we have the honor of debuting another incredible collaboration between the two.

The video for “Take a Stand” was filmed in Berlin in various backyards as well as throughout the city’s streets at night. Over email, director Kieran Behan explained that the duo’s video collaborations are heavily inspired by their mutual love for Berlin and Ellen Allien’s “deep history with the city itself.”

She elaborated, “For this video we met up beforehand and she listed some iconic areas and ideas she had – we both love this abandoned building square in the city center and I scouted a platform behind the area for some of the dance moments. Ellen picked the second spot where I filmed her portraits and movements, this little surreal forgotten lot in the middle of a hustling and bustling and ever-changing neighborhood close to where she lives.” She also credited Halla Farhat for finding the four dancers featured in the video whose unique talents added to the “authenticity of their motions with the movements of the song” – Murat Adash, Katie Kuips, Rima Baransii, and Sekou.

As for Ellen Allien herself, “Take a Stand” is all about reminding listeners about the political roots of techno music, “My own history and experiences in the Techno scene inspired me to motivate people to stand up for what they think, for their opinions and rights. A lot of people say that Techno isn’t political, but why not? It can be political of course.”

Take a stand and get lost in Berlin with Ellen Allien in the video above.

For more of our premieres, check out some of London’s finest – Ragz Originale and Cartae – cruising ‘Blade Runner’-style in their new video for “She Said Run.”