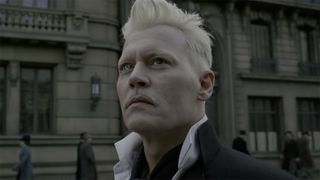 This week Warner Bros. shares the third and final trailer for Fantastic Beasts: The Crimes of Grindelwald, the second installment in the studio’s five-part series centering around Newt Scamander (played by Eddie Redmayne) in a wizarding, pre-Harry Potter world. The new trailer highlights a familiar Harry Potter character, Nagini, also known as Lord Voldemort’s snake, as we may find out the origin of the faithful pet.

In Fantastic Beasts: The Crimes of Grindelwald, Newt Scamander has been asked by a younger Albus Dumbledore (played by Jude Law) to battle evil wizard Gellert Grindelwald (played by Johnny Depp), who is determined to lead a revolt of dark wizards.

Directed by David Yates, from a screenplay by J.K. Rowling, Fantastic Beasts: The Crimes of Grindelwald lands in theaters November 16.