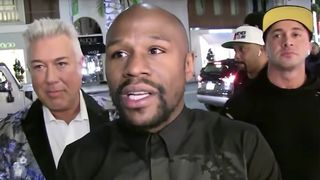 In a video interview with TMZ, boxer Floyd Mayweather confirmed that his New Year’s Eve fight with Japan’s Tenshin Nasukawa will indeed be happening after all.

Mayweather told TMZ, “We’re gonna make it happen,” but did add that it would only happen if kickboxer Nasukawa agreed to a kick-free exhibition. And, naturally, if it pays well — with Mayweather telling TMZ that he has already earned seven figures simply from promoting the bout. “I’m moving around with the guy for nine minutes, and of course it’s gonna be the highest paid exhibition ever,” Mayweather says in the clip.

The unverified Twitter account of Rizin Fighting Federation CEO Nobuyuki Sakakibara also confirmed the exhibition fight would go ahead after a “misunderstanding” with Mayweather was settled. In the tweet, he says the details of the fight will be confirmed at a press conference upon Sakakibara’s return to Japan.

As for Mayweather, the rest of his TMZ chat focused on showing off his wrist ice and comparing his wealth to the likes of Warren Buffet and Oprah Winfrey. Watch the conversation in full via the video above.

Do you want to see Mayweather vs. Nasukawa go down? Share your thoughts in the comments.

In other news, this luxury bunker shows how the mega-rich will see out the apocalypse.

A ‘Joker’ Sequel Might Not Be Happening After All
MoviessponsoredNovember 20, 2019

Ready for the Cabin & Catwalk, These Luggage Options Are an Airport Flex
SelectssponsoredNovember 4, 2019