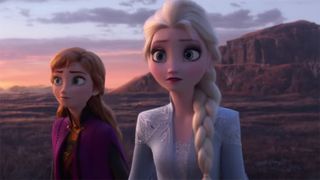 The past is not what it seems. The new trailer for #Frozen2 is here. pic.twitter.com/dx0AYj8p7m

Along with Anna, Kristoff, Olaf, and Sven, Elsa embarks on a new adventure in the sequel to 2013’s Frozen, setting out on a “dangerous but remarkable journey,” according to the official synopsis. As opposed to Frozen where Elsa feared her powers were too much for the world, in Frozen 2 she merely hopes they will be enough.

Idina Menzel, Kristen Bell, Jonathan Groff, and Josh Gad voice the characters in the film, directed by Jennifer Lee and Chris Buck, and produced by Peter Del Vecho. Frozen 2 comes to US theaters on November 22.