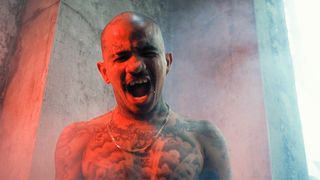 On the heels of releasing his debut album Basic Volume, due July 27, GAIKA has just dropped another new single from the upcoming LP with “Immigrant Sons (Pesos & Gas),” co-produced by Sophie.

In addition, the visuals portray GAIKA’s eyes with laser beams, perhaps to suggest having vision among those who are blind sheep and just follow, as the song dares those unprivileged to stand stand together and fight.

In other new music videos, Ty Dolla $ign and Jeremih hit the skating rink in “The Light.”

Learn How to Make a Tyler, the Creator Song in This Hilarious Instructional Video
MusicsponsoredApril 24, 2019