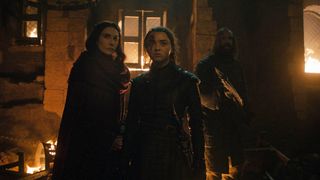 areLast night’s episode of Game of Thrones is already one of the most talked-about in the show’s history. Titled “The Long Night,” the third episode of the eighth and final season showcased the longest battle ever featured in television and film.

To help further digest “The Long Night,” HBO shares a behind-the-scenes look at the making of the monumental episode. The 40-minute clip finds the Game of Thrones crew members detailing how the epic battle came to life, while we also get to hear from the cast. HBO provides insight into the shooting schedule for “The Long Night,” as the cast and crew discuss weathering harsh filming conditions. We also find out how special effects were added post-production, in addition to witnessing director Miguel Sapochnik talk us through the filming process.

Press play above to dive deeper into season eight episode three of Game of Thrones, then be sure to peep the teaser for the next episode.

This Epic Video Breaks Down Everything Wrong With The ‘Game of Thrones’ Finale
MoviessponsoredSeptember 10, 2019

Emilia Clarke Felt Pressured to Do Nude Scenes After ‘Game of Thrones’
MoviessponsoredNovember 20, 2019