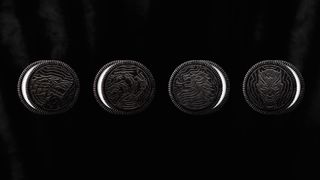 The final season of Game of Thrones premieres on HBO on April 14, and to celebrate the critically acclaimed TV series, Nabisco has unveiled limited edition Game of Thrones-themed Oreo cookies for die-hard fans.

The most epic cookies of all time are here. #GameOfCookies #ForTheThrone

In the clip above, the signature chocolate sandwich cookies are introduced by re-creating the show’s main title sequence in an amazing setup of nothing but 2,750 Oreos to illustrate the ever-changing map of Westeros.

The special Oreo cookies are decorated with embossed insignias of the Great Houses: Lannisters (lion), Targaryens (dragon) and Starks (direwolf), as well as a cool portrait of the Night King. Furthermore, the Oreos are sealed in a unique package that comes in dark grey/silver and spells out “Oreo” in the show logo’s font, including the three thin, vertical lines in the letter “o.” In addition, the featured Oreo is seated in the show’s recognizable Iron Throne to cap off the theme.

Bran’s Diss & The Most Hilarious Memes From the Emmys 2019
MoviessponsoredSeptember 23, 2019

Was the ‘Game of Thrones’ Finale Teased in This Season 1 Poster All Along?
MoviessponsoredApril 15, 2020
What To Read Next
Load More
Search Results
Load More