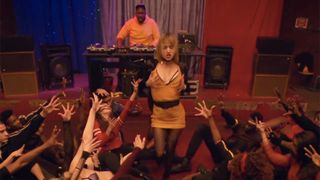 Argentine filmmaker Gaspar Noé (Irreversible, Enter the Void, Love) is gearing up to release his latest film, this week sharing the official trailer for Climax. Starring Sofia Boutella of Atomic Blonde, the picture details a party that quickly spirals out of control.

Joining Boutella is a cast of professional dancers, as they gather in an empty school building to rehearse. After practice, the group begins an all-night celebration, fueled by sangria that has been laced with potent LSD. From excitement to chaos, those in attendance become overtaken by all-out anarchy and violence amid the psychedelic meltdown.

Press play above for your first look at Gaspar Noé’s Climax, which is due out later this year.