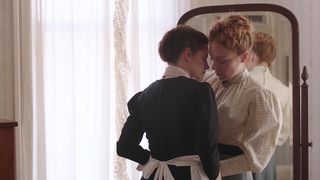 The infamous Lizzie Borden murders are being reimagined for the big screen almost 130 years later, and the newly dropped Saban Films and Roadside Attractions trailer suggests that we’re in for one tense experience.

Starring Chloë Sevigny as the titular Lizzie and Kristen Stewart as her love interest, Bridget Sullivan, the movie’s narrative retells the story of a murder case that gripped America back in the late 1800s — one that saw Lizzie Borden tried and acquitted for the passing of her father and step mother, who were axed to death — and the lesbian love story that apparently inspired the act.

Per the official synopsis, the movie is a dark tale of “repression, exploitation, and thwarted dreams.” Full of creepy, sinister vibes — most of which come from Lizzie’s pervy father — we’re shown how Lizzie finds a kindred spirit in the new housemaid, Bridget, and the murder their intimacy inspires. Stewart’s Irish accent is pretty special, too.

Watch the trailer in full up top.

Will you watch Lizzie? Let us know in the comments.