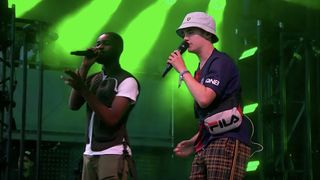 A 15-year-old in a PSG shirt and a bucket hat was the unexpected rap-star at this year’s Glastonbury Festival. Alex Mann from Wells, Somerset has preoccupied the internet after he nailed every line of “Thiago Silva” when UK rapper, Dave spotted him in the crowd.

It was Mann’s first Glastonbury Festival and according to comments on BBC music Twitter, he had phoned in sick to work to attend.

Imagine phoning in sick and then being caught out on national tv lmao pic.twitter.com/zWNCBb0Rjk

The teenager was wearing a Paris Saint-Germain F.C. shirt  with Silva’s name on the back, and according to reports, Man made himself visible (on the shoulders of a friend, three rows from the stage) when Dave asked the crowd, “Who is sober enough to sing these lyrics with me?”

According to The Guardian, Dave said: “I see a PSG shirt over there, but do you know the lyrics?” After Alex responded with a few confident lines, Dave concluded: “He looks like he knows the lyrics… Yeah, let’s take a chance.” Watch what happened in the clip above.

There is some speculation as to whether the whole performance was a setup, you’ll have to watch the clip above to make up your own mind. But there’s no denying his talent. Since Sunday, he’s gained 110k followers on Twitter and 61k followers on Instagram.

If watching that Alex fella in his bucket hat bash out Thiago Silva with Dave at Glastonbury doesn’t make you proud to be British then I don’t know what will. #Glastonbury2019

15 Drops
The 15 Best Products to Drop This Week & Where to Buy Them
SelectssponsoredSeptember 1, 2019

15 Drops
The 15 Best Products to Drop This Week & Where to Buy Them
DesignsponsoredJune 2, 2019