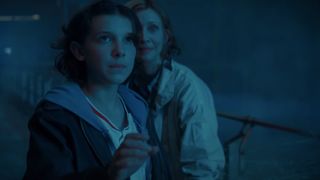 After dropping the second trailer back in December, a new teaser for Godzilla: King of the Monsters has arrived, getting us even more hyped for the upcoming movie.

Starring Stranger Things‘ Millie Bobby Brown and full of stunning visuals, the trailer shows off Mothra, the giant moth monster, Ghidorah, a three-headed dragon, and Godzilla, who is on the humans’ side.

The clip has some definite King Kong vibes, with Brown’s character reaching out to the monstrous Godzilla. As a final touch, a haunting rendition of “Somewhere Over the Rainbow” from The Wizard of Oz plays in the background.

Millie Bobby Brown is joined by Vera Farmiga, Charles Dance, Kyle Chandler, Bradley Whitford, Ziyi Zhang, Ken Watanabe and more. Godzilla: King of the Monsters is the sequel to 2014’s Godzilla. Catch it in theaters from May 31.