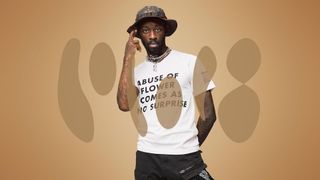 Grammy-nominated artist GoldLink recently appeared on A COLORS SHOW for an exclusive performance of his new single, “Justine’s Interlude” produced by WaveIQ.

The DMV rapper’s latest appearance on the music platform follows his first experience with “Rough Soul” back in 2016, and it marks a milestone as GoldLink is the only rapper to appear on COLORS twice. The featured intimate performance showcases the rapper paying tribute to his late friend Mac Miller and the drama public figures endure out of public view in a story about a close female friend.

In addition, the song’s title suggests that it might appear on an upcoming project, as the rapper’s previous original content was last year’s single, “Got Friends” featuring Miguel.

Enjoy Goldlink’s COLORS session performance of “Justine’s Interlude” above, and stay tuned for more from the artist.

Up next, Frank Ocean reveals his skincare routine and talks politics in a new ‘GQ’ interview.

‘COLORS’ Finally Releases the Headphone Used on the Show
DesignsponsoredDecember 4, 2019

Looking Back at How the Pantone Colors of the Year Defined the Decade
DesignsponsoredDecember 30, 2019

Correcting Colorism: How Live Tinted Colors Between the Eyeliners
LifesponsoredJuly 17, 2019

Here’s How to Wear Pantone’s Color of the Year 2020
SelectssponsoredJanuary 15, 2020
Follow
Highsnobiety Music
What To Read Next
Load More
Search Results
Load More