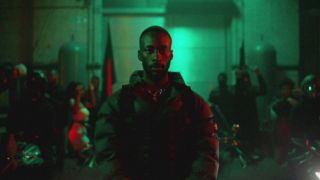 GoldLink is currently on a roll with the release of his latest single, “Zulu Screams.” Today, he unveils a Meji-directed visual for the collaboration with Maleek Berry and Bibi Bourelly, and it’s serving some major Step Up vibes with some superb dance sequences.

Last week, GoldLink made a guest appearance on Zane Lowe’s World Record on Beats 1 where he disclosed details about the inspiration behind his forthcoming album and the direction that he approached with putting the project together.

“It’s natural progression of where I felt like I was going to head anyway,” he said. “I wouldn’t say it’s entirely what the whole kind of sonic of it is, but it’s a good intro for like a whole world building thing that I’m trying to like introduce.”

Back in January, the rapper teamed up with Peewee Longway and WaveIQ on “Got Muscle.” He recently connected with Col3trane on the song “Superpowers” as well. This summer, GoldLink is expected to perform at AFROPUNK in Brooklyn, New York.

Watch the whole dance battle go down in the video above.