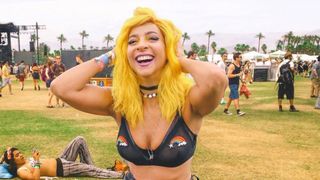 Influencer Gabbi Hanna faked an entire trip to Coachella on Instagram, before uploading a detailed video showing how she pulled off the prank. In the video above Hanna explains that the experiment aimed to expose just “how easy it is to fake things on social media.”

OOPS i faked it all! go check out the video on how i pretended to go to coachella up now! 🖤 *photoshop by @kellansworld – welp- i’m at coachella and i’m just as shocked as you… BUT HAPPY TO BE HERE! SO excited to play dress up and enjoy the culture & live music! thanks so much to my girl @sydneyxgia for talking me into it (happy birthday, bitch), and to her mom for finding this BOMB AIR B&B WHAT UP VICKI HOW U DOIN GURL. stay tuned for all my outfits i tried way too hard on and messy stories no one asked for <3 #coachella #roadtocoachella #chella #day1 #weekend2 #palmsprings #coachellavalley

As Hanna notes, many festival-goers double or triple-up on outfits on the first weekend of Coachella so that they can post pictures during the second weekend without attending. For Coachella 2019, Hanna took things to the next level. The deception included regular IG stories, a graphic designer who Photoshopped her images, regular outfit changes and a lot of wigs.

While she achieved her goal, it wasn’t without a huge amount of effort. She reveals that pulling off the deception required more energy, stress and time than her week-long trip to India.

OOPS i faked it all! go check out the video on how i pretended to go to coachella up now! 🖤 *photoshop by @kellansworld – felt kinda weird going to hoechella on such a holy day so i decided to cover up in my great-grandmas AdOrAbLe 2 piece set for day 3 💙 getting day drunk with my nipples out in a field surrounded by EDM music doesn’t exactly scream “Christ Has Risen!” so I decided to take it easy today. On a side note: Kanye’s service this morning was beautiful. Happy Coachella! i mean, Easter! #coachella #coachellaweekend2 #weekend2 #coachella2019 #day3 #easter #hoechella #chella