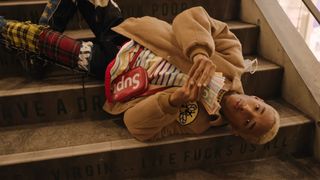 Jaden Smith has emerged from the shadows of the Internet and bestowed a new single upon us called “GHOST” featuring Christian Rich and produced by Rich, FnZ, and HWLS. The track comes with an accompanying visual that shows the rapper decked out in a fresh fit and hitting the streets of Tokyo with a colorful crew by his side. The description for the video includes the following caption: “Erys Will Return.” In an interview with The FADER, Jaden explained how JAY-Z has influenced the direction that he wants to take his music career.

“After I released my last album, I wanted to take a next step further and evolve,” he said. “I decided to talk to Hov and he told me he thought the album was cool and he said as I got older I would space out my verses more and I’d say more with less. That’s the total inspiration behind my next album. He’s also the head honcho at the label. Starting a record label MSFTS just did it that would only be possible with Roc Nation and Hov.”

Aside from this song, the 19-year-old rapper has only put out a few remixes of “Icon” which is featured on his 2017 debut album SYRE. Of course, nothing will ever measure up to Will Smith‘s remix with Nicky Jam.

In other news, Selena Gomez stars in Petra Collins’ new horror film ‘A Love Story.’ Peep it all right here.

Shia LaBeouf Is Hosting a Birthday Fundraiser With a ”Better Lineup Than Coachella”
MusicsponsoredJune 16, 2019

Sponsored Story
What You Need to Know About both, the Parisian Footwear Brand Favored by Jaden Smith
SneakerssponsoredDecember 2, 2019
Follow
Highsnobiety Music
What To Read Next
Load More
Search Results
Load More