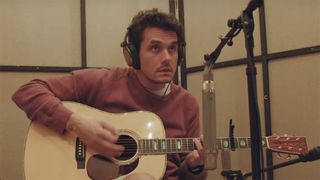 John Mayer releases his second single of 2019 today, presenting a self-written-and-produced number titled “Carry Me Away.” The song follows “I Guess I Just Feel Like” from February and his 2017 album, The Search for Everything, which is certified gold.

I didn’t see it coming that this tour would have so much life and energy in it, so when it was time for a two week break, I found myself wanting to create. My desires for vacation were simple: to live in shorts and a t-shirt and play with my dog in the sun and live a simple happy normal life, all while writing this song I had swirling around in my head. I present to you “Carry Me Away,” which was made with the same love you’ve sent my way on this run. I hope you enjoy this late summer postcard. You know where to find it…

You can see the making of “Carry Me Away” via the official lyric video above. The clip shows Mayer in the studio laying down the instrumentals and recording the track in general.

Fans of John Mayer can catch the Grammy Award-winning artist on tour this fall as a part of his world tour or with Dead & Company. Mayer’s personal tour launched in March of this year, as he has traveled to New Zealand, Australia, Asia, and North America, before heading to Europe in October.