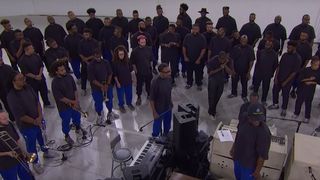 Last week Kanye West took over the $4 billion Oculus station house in Manhattan to deliver a moving performance of “Closed on Sunday” from Jesus Is King. Watch above.

The performance was taped for a special East Coast installment of Jimmy Kimmel Live! It was West’s second appearance in a row on the show that week. The previous evening Ye dropped by the late-night show to promote his ninth studio album.

The cathedral-like Oculus structure, which opened in 2016, provided an apt backdrop for the stirring performance. West led a gospel choir dressed in dark tees and blue pants in the gospel-inflected track. As with Sunday Service performances, the choir encircled a small band and Kanye at its focal point.

Want more Jesus Is King content? Find out what we made of the album here.