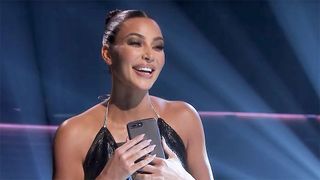 Kim Kardashian appeared on last night’s episode of The Tonight Show Starring Jimmy Fallon and took part in a hilarious game that resulted in her being forced to randomly reveal things from her phone on the spot. Watch above.

The first challenge saw Kardashian sharing the last text exchanged between her and husband Kanye West. The message was a picture of a lake and captioned, “West Lake. The first ranch in our family. 50 years from now this will mean so much to us.” Kardashian then explains that the lake is on West’s new ranch in Wyoming.

“It has something that’s called West Lake. So he took a picture of it and that’s like a ‘sign.’ He’s so excited to maybe be moving to Wyoming” she added, before quickly clarifying, “not full-time.”

The funniest part of the game involved Kardashian revealing her last Google search. “Do I have to? You’re not going to understand,” she offered, embarrassed. That search? “Is shapewear with pee hole better.” Of course, she swiftly launched into an explanation.

“I just launched (her shapewear line) SKIMS and I’ve been debating if I need a pee hole in certain things.” To set the scene and provide an example, she reveals that she’d wear a pair “under a dress at the EMMYs or whatever. I’d try to use the peehole and then you pee all over yourself as it doesn’t work half the time anyway.”