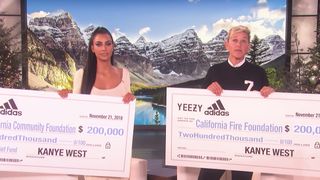 Kim Kardashian and Kanye West have donated $400,000 to California wildfire relief efforts, Kardashian revealed during an appearance on Ellen earlier this week.

The donation was given in partnership with YEEZY and adidas, and broken into two chunks. One $200,000 cheque was sent to California firefighters and another $200,000 to the California Community Foundation’s Wildlife Relief Fund. Later in the episode, Kardashian presented firefighter Michael Williams and his wife Michelle a check for $100,000 to rebuild their home which they lost during the fire.

During her discussion with host Ellen DeGeneres, Kardashian said firefighters had “saved our whole community.”

“We’re so grateful to them,” Kardashian said. “So honestly, we couldn’t do it without them.” Watch her heartfelt explanation in the video up top.

Kardashian also talked candidly about her family’s use of a private firefighting service, which helped save her home after fires had swarmed the giant park next to the house. Acknowledging the privilege she has to be able to hire such a service, Kardashian also explained that her house acts as a kind of barrier to the rest of the community, so by keeping her own home safe, the entire neighborhood remained intact.

This Is What Kim Kardashian & Kanye West Order at McDonald’s
AdvertisingsponsoredJanuary 31, 2020

This Is How Kim Kardashian & Kanye West Are Decorating Their Home This Christmas
DesignsponsoredDecember 9, 2019