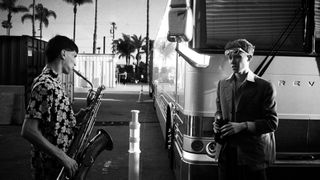 A few months ago, King Krule returned to the surface with a video for “Biscuit Town.” Today, he’s sharing a Charlotte Patmore-directed visual for “Cadet Limbo” that makes life on the road in America for touring musicians look any less exhausting. In a recent interview, Archy Marshall explained how saxophonist Ignacio Salvadores played a huge role in influencing his songwriting so he wanted to portray that in the grainy, monochrome video.

“Galgo [Salvadores] came along in real life and influenced me to write more and more,” he said. “So, the concept of the video became that he’s this important figure that I couldn’t quite get my hands on. Him behind me playing sax and then disappearing.”

Once again, this piece is a part of King Krule’s ongoing collaboration with WeTransfer. The OOZ is out now on True Panther. Watch the entire visual unfold above.

In other news, MUNYA just dropped a video for “Hotel Delmano.” Peep it right here.