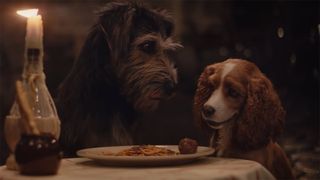 As we are nearing the launch date of Disney+, this week Walt Disney Studios shares the second trailer for its anticipated Lady and the Tramp remake. Tessa Thompson and Justin Theroux voice the titular characters in the live-action film, which arrives in less than a month.

This year’s Lady and the Tramp is a re-telling of the 1955 animated classic. For those unfamiliar, the story centers around a pampered house dog, Lady, and a street smart stray, Tramp, as they come together despite their differences to embark on an unexpected adventure. The new trailer for the movie provides us with backstories for both of the canines, and it also teases the iconic spaghetti dinner scene.